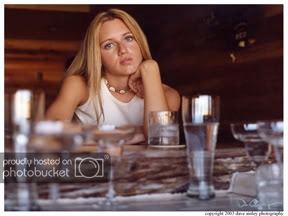 Since 2001, my business has gone from a part-time experiment to a full-blown career. Dave Ainley Photography is a company I started in May of 2001. Having taken it as an elective in high school and made it my college focus, I guess I was the natural choice for parents who were all about saving some money on their kids’ senior portraits. When my mom asked me to shoot my brother and cousin’s senior pictures, I regrettably agreed. You see, from the start, I wasn’t portraiture’s biggest fan. All I’d every seen was contrived and lifeless. Furthermore, I was actually in a bit of a creative funk when it all began. So, knowing NOTHING about portrait photography but what I’d personally seen locally, I shot their photos the way any typical portrait studio would. Every shot was posed and lifeless. After-all, that’s what I thought senior portraiture was all about! For the next year, I dreaded every shoot! I had sold out my artwork for a paycheck! Is that who I’d become? Just another hired hand? However, I kept pushing on, saying, “It’s a paycheck, Dave, and you need the money.” That was my mindset between May of 2001 and October of 2002. Even at that point, I was bored stiff every time I had a senior portrait session, but I learned to not be so negative. I’d take a few liberties here and there, but for the most part, stayed pretty true to the book. It wasn’t until 2003 when I had my first break-through in my portraiture. I photographed pictures for a girl named Richelle. During her shoot, I had an idea.

To this day, I still love the photo shot through the shotglasses and martini glasses on the wet bar in her basement. It was a moment of total enlightment for me, and from that day, the gears started to turn.

In 2004, my company made its first REAL turn. On a session with a good friend named Jordan, I took this shot. 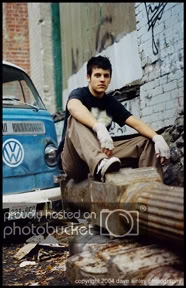 I had parked my VW close by as we were taking some alley shots, and I remember at one point taking a step back and seeing my bus sitting there. I thought to myself, “This looks perfect here!” Deciding for the first time to trust my instincts, I snuck this shot in. I don’t think I even TOLD Jordan I was doing it. When I got the film back and saw this photo, I was floored. I couldn’t believe that by trusting my instincts, I had taken my portraiture to an all new place- a place that was personal to me, and one that transcended portraiture and passed into the realm of art.

For me, the photo of Jordan in front of my bus was a turning point in my photographic career. I started trusting my intuition more and more, until I came to a point where I said, “I don’t care what other studios are doing. I’m an artist, photography is my art, and I’m going to trust me to further myself photographically.”

Today, Dave Ainley Photography is one of, if not the single edgiest portrait photography company in Spokane, WA, and much of the surrounding area. If you want something ENTIRELY different for your portraits, whatever the purpose, call me. I’m the guy you wanna talk to. I’m not afraid to get my hands dirty on a shoot. I’ll do what it takes to make it happen, sometimes risking my own life for what I believe to be the perfect shot.